The first stop on my blog tour! 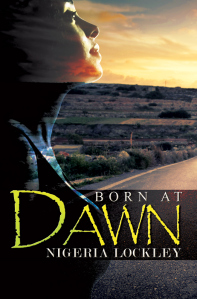 Born at Dawn by Nigeria Lockley

“Thanks, Barbara, for letting Keith and James come over,” Cynthia said as soon as Barbara Dillinger opened the front door of her brownstone. “Marvin got tied up at work.” Lying, Cynthia fidgeted nervously on the stoop while waiting for the boys to come out.

“Looks like he’s not the only one that got tied up,” Barbara said her hazel eyes filled with horror. She pointed at the welts Marvin’s hands had left around Cynthia’s neck. “Why don’t you come in and relax for a moment?” Barbara opened the door wide enough for Cynthia to slide through. “The boys are upstairs playing—karate chopping and body slamming each other. A few more minutes of play isn’t going to hurt them.”

Barbara took Cynthia’s black, leather jacket from her and escorted her from…